Verizon Ranks Sarasota No. 2 on List of Best Small Cities to Start a Business 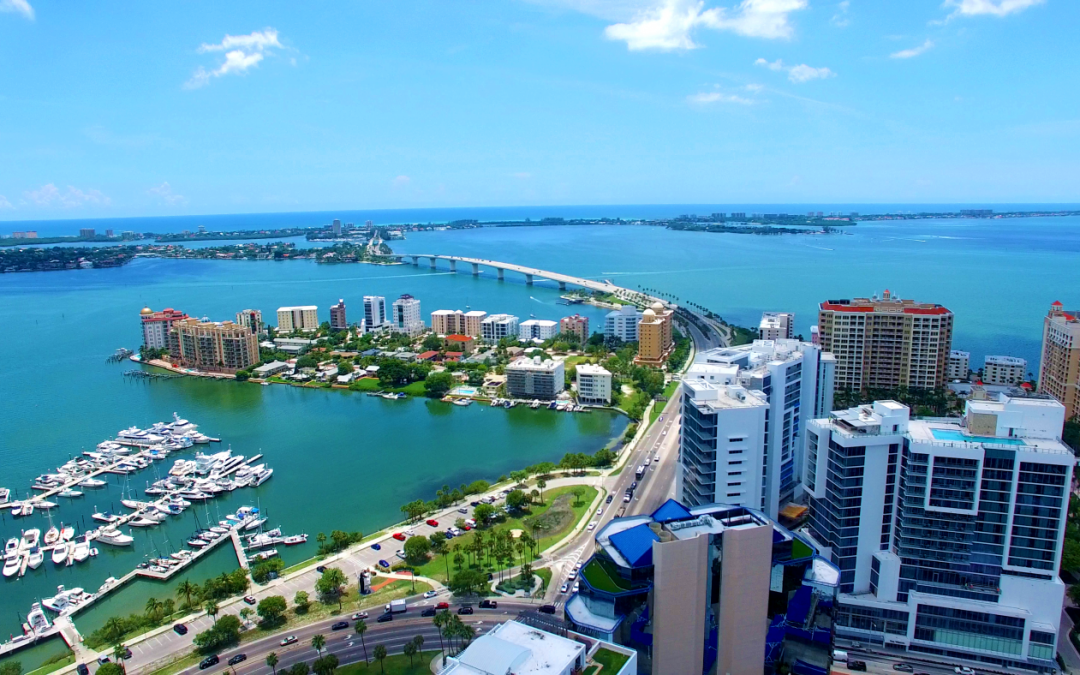 America has become the veritable poster child of the startup era. It’s hard to look at the surge of self-made billionaires across all industries in the US, with their humble startup beginnings, and not feel a certain amount of awe. Things around here show no sign of slowing down, and given that this is the “land of opportunity,” it’s unfair to crown only major metro areas across the country as the best places to find it.

Though it is true that when it comes to places rich with business growth and opportunity, small cities don’t generally come first to mind. But avoiding the chaos and competition of large cities and planting your roots in a quieter, yet equally industrious, pocket of the country puts your business in a uniquely advantageous position. After some generous research and a bit of computing, Go.Verizon.com has found that the smaller the city, the more room there is to grow. 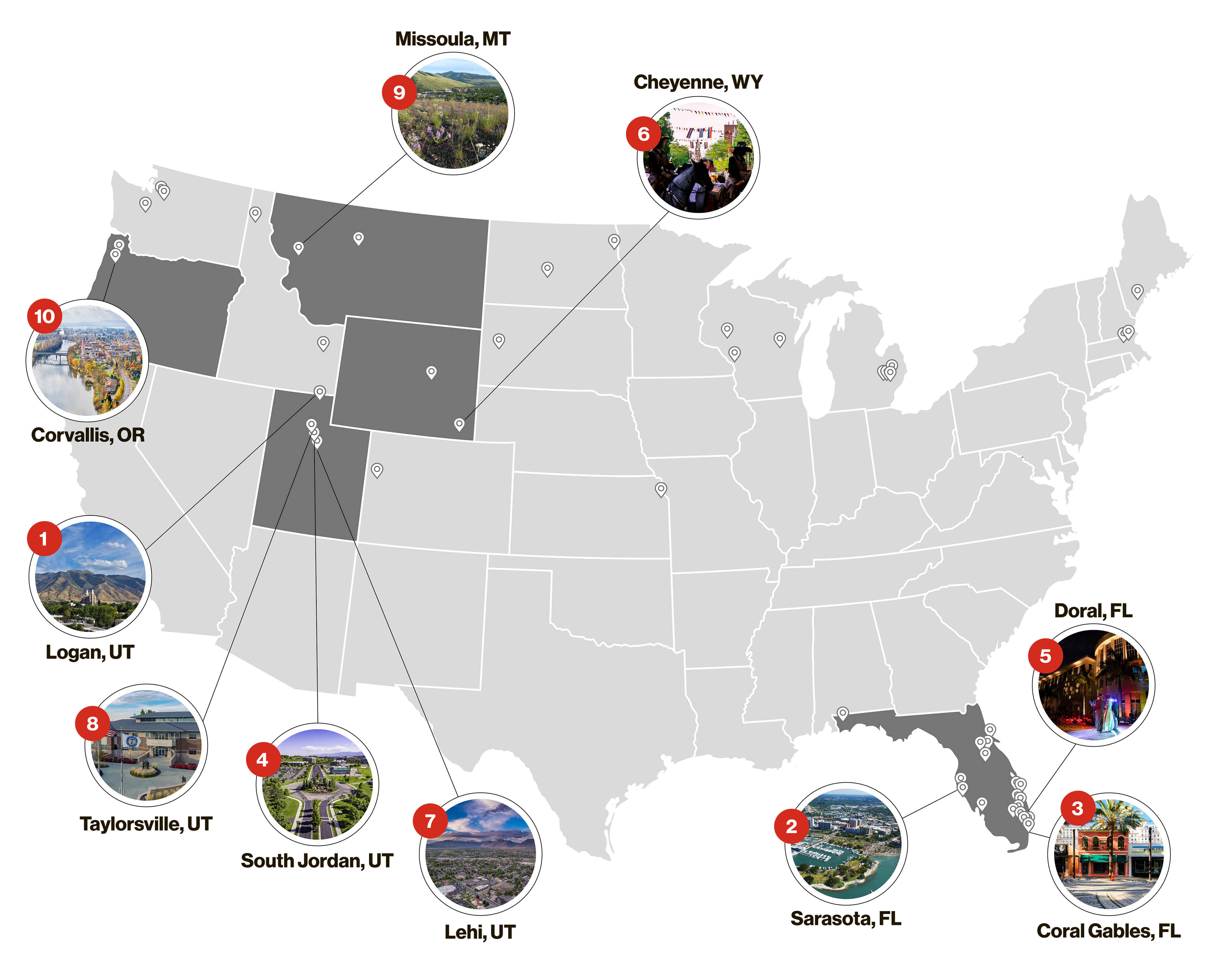 So how did these cities win the top spots? It’s all about the numbers. The Go.Verizon.com team gathered data from nearly 300 cities across the country, focusing on certain factors that would categorize them as “small” (sorry, no Silicon Valley on this list) without dipping below the mark to “town” status (no one-horse situations, either). These elements also indicated the financial climate of each city and an overview of its demographics. Such factors included:

Population: According to the US census, the population of a city must fall between 50,000 and 75,000 people to be considered a “small city.” Most of the spots in the top ten hit the high end of the scale but still manage to balance out the urban stride with a more hometown vibe.

Education: Or, more precisely, higher education. The team analyzed the percentage of the population over 25 years old who have received a bachelor’s degree or higher from an accredited university or college.

Travel time to work: More specifically, the average total travel time it takes working individuals 16 years and older (who do not work at home) to reach work from their residences every day. This takes into account the time spent carpooling, waiting for public transportation, and navigating traffic.

Income per capita: For this particular study, mo’ money = mo’ problems. To hit the small biz sweet spot, analysts took into account the average cumulative income of residents in each city. That number reflected the city’s workforce being paid fairly and labor costs still being manageable for employers.

Broadband access: The internet is kind of important nowadays. In fact, it’s pretty crucial to most business operations. Data was collected based on the access each city has to internet, running at speeds of at least 10 Mbps for downloads and 1 Mbps for uploads.

Loans per capita: New businesses can rarely get up off the ground without a business loan. It’s usually one of the first things checked off a startup’s to-do list. With this in mind, how easy is it to get a loan in your city?

Tax scores: Typically, lower taxes provide a better environment in which to establish a new business. The Tax Foundation’s 2019 State Business Tax Climate Index was accessed and the tax-friendliness of each city was determined.

Logan is much more than a sleepy college town nestled among the farmland of northern Utah’s Cache Valley. Utah State University is crucial to both the economic and educational infrastructures of the city, and the state’s low tax rate makes starting and sustaining a small business surprisingly manageable. Cold, snowy winters balance warm, picturesque summers and attract all degrees of life, from the die-hard skiers to the day hikers and campers, who make outdoor gear and clothing shops thrive. And though Logan is technically categorized as a small city, it clings to its pioneering small-town roots and features dozens of locally owned and operated businesses, some of which have been fixtures in the city for decades. If you’ve landed in Utah with a venture in mind, you might want to consider cashing in on Cache Valley.

It’s a good time to be in business in Florida, it seems—cities in the Sunshine State make up 30% of this list’s top 10 and nearly half of the top 50. What gives Sarasota the edge? Maybe it’s the shorter commute time than its fellow Floridian top-tenners, Coral Gables and Doral. It could be the rich, tourist-fueled economy and thriving cultural arts scene that draw not only snowbirds but also young entrepreneurs to the city, amping up the innovative atmosphere. Or maybe it’s the idyllic beaches spread along the Gulf of Mexico that make life for denizens feel like a constant vacation. Maybe it’s a little bit of everything. Whatever it is, Sarasota is riding the upward trend like a boss.

Hot on Sarasota’s tail is fellow Florida all-star Coral Gables. The City Beautiful may have the lowest population out of the top 10 cities, but it simultaneously boasts the highest income per capita and beats out the other 9 in terms of education, making for an understandably productive environment. With the University of Miami as the educational fixture of the surrounding area, and old gems such as the Biltmore Hotel and Venetian Pool lending a historic pulse to the city, Coral Gables is the perfect mixture of cutting-edge and classic. Businesses here operate along shady tree-lined streets in Mediterranean-style buildings, so not only is it industrious—it truly is beautiful.

A stone’s throw from the Great Salt Lake and in full view of the Oquirrh Mountains, this piece of the Salt Lake metro area is more populous than Coral Gables, but with a lower education percentage and income per capita. With a decent work travel time (about 25 minutes, most likely to downtown Salt Lake City), South Jordan is becoming a booming tech industry hotspot, with software companies growing from the seeds of startup ventures into impressive enterprises. The tax and loan outlook in the city is far from dismal as well; Utah is known for its affordability, and the large outdoor industry lends adventure and versatility to the local economy. Backpacking in the summer and skiing in the winter? Nothing better.

Bringing it back to Florida once again, Doral leaves nothing to be desired when it comes to living life with the Miamian flare. It may have a higher population than both Coral Gables and Sarasota, but a longer commute and lower income per capita settle it further down the list—though not far enough to make it any less of a serious small city contender. The city is fueled by entrepreneurship and education (it’s home to 8 universities and colleges). Financial institutions, shops, restaurants, and small businesses abound thanks to Doral’s close proximity to the Miami airport, and the Carnival Cruise Line headquarters provide the lifeblood of the local tourist industry. It’s just one more city that’s contributing to Florida’s small business domination.

Clocking in as the only state capital to break the top 10, Cheyenne proves its grit right in the heart of the West. Frontier City goes to great lengths to celebrate its homesteading, cowboy-loving heritage—you can attend the world’s largest annual outdoor rodeo and take pictures next to 8-foot-tall painted boots placed throughout town. But the old, rustic feel of the city is yielding to an exciting new growth and energy. The local economic development agency Cheyenne LEADS has a lot to do with that, dedicating its efforts to “attracting new capital investment” and diversifying the economy. Cheyenne may celebrate its past, but it ultimately looks forward to the future.

It’s true—no Silicon Valley city appears on this list, but how about some Silicon Slopes? Located at the northern edge of Utah Valley, Lehi is one of several cities that have converged to make up an ever-growing tech industry haven. Here startups are nurtured into lucrative franchises, and global tech giants like Adobe and Microsoft operate large campuses and contribute their fair share of street cred to the area. Restaurants, retail shops, and the recreational complex Thanksgiving Point help feed the local economy and offer diversity among the digital conglomerates. A high education rate, short commute time, and healthy population combine to make the city a very attractive place to start a business. So what’s next for Lehi? More growth and prosperity, if the current trajectory persists—and there’s no doubt that it will.

Once again the list comes back to the western edge of the Salt Lake Valley. Smaller than South Jordan and bigger than Logan, Taylorsville is a happy medium as far as income, commute time, and access to loans goes. Though it shares space with a smattering of other small cities such as West Jordan and Kearns, constant traffic brought in by I-215 and Bangerter Highway keep the economy up and at ’em. And to seal the city’s top 10 seat, the SBA-sponsored program SCORE helps educate and encourage entrepreneurship and aids in small business growth and success. So make way for Taylorsville—it’s coming full throttle into the economic race.

Some would think it a little out of the way for starting a business, but Missoula is enjoying a fast trend upward in its population and economy. As home to the University of Montana, it boasts a fairly educated crowd, and has one of the lowest average commute times at just 15 minutes. Montana is also an extremely tax-friendly state, making it a prime spot for small businesses to take off. Heavy retail and service markets boost the local economy, attracting more and more small startups and lending a small-town flavor to the Hub of Five Valleys. Plus, it’s probably one of the most picturesque cities on the list. Would you just look at those mountains?!

For a breath of fresh air, the scenic Pacific Northwest is home to the last spot in the top 10. Corvallis doesn’t mess around when it comes to education—Oregon State University makes sure of that. And a short commute time to work makes life a little easier for residents. But a lower income per capita even things out for the city, though not enough to stunt its growth by any means. Corvallis was also featured on Go.Verizon.com’s list of the most innovative metro areas in the United States, so the days of this city’s small business influence are far from over.

The top 50 cities to start a small business:

This article was originally written & published by Verizon at https://go.verizon.com/resources/the-best-small-cities-to-start-a-small-business/