Leaving Tracks: How Malls Track Shoppers Inside and Outside Its Doors 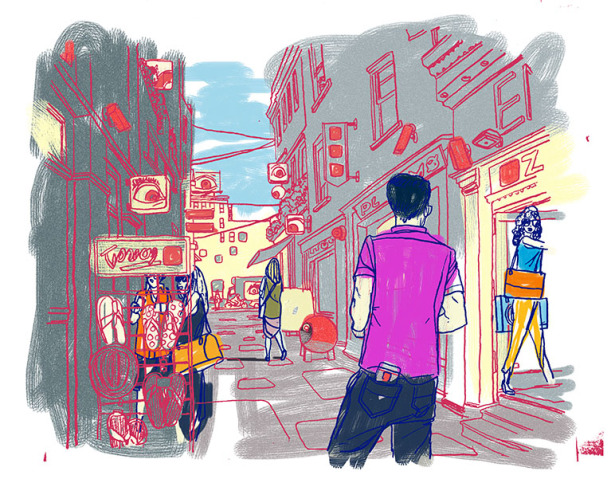 Your malls know you.

That is, the mall knows it if you just so happen to have a smart phone. Mall owners and retailers have been making a dramatic push to study location data gleaned from shopper’s smart phones. A variety of companies have popped up to collect shopper’s movements and compile them in reports for stores and landlords.

“This data gives [mall owners and retailers] unprecedented information,” said Noam Ben-Zvi, the co-Founder and CEO of Placer.ai, which compiles reports on public places that show where customers come from and go next. “That helps you drive decisions and build strategy.”

And, in today’s struggling retail landscape, that information might be the difference between life and death. Enclosed malls around the country have started to shutter, resembling ghost towns as traditional anchors like Macy’s and J.C. Penney close up shop. Retailers like Sears, Toys ‘R’ Us and Teavana filed for bankruptcy recently, and some have dubbed the recent years a retail apocalypse.

Brands and mall owners can no longer afford to make expensive mistakes, such as leasing to a retail tenant that won’t get foot traffic or opening up a location that will fail, and the new technology can help them get a sense of what will work beforehand, said Griffin Morris, the founder of Spatial.ai which scours social media posts to better understand nearby shoppers’ interests.

“It shows you what kind of tenants you should be going after,” Morris said. “When things are tough, you need to make better decisions.”

For years, mall owners and stores relied solely on demographic data—like population and income levels—in nearby zip codes to figure out where to open a new location or the tenant mix of a shopping center.

That data was not always reliable or painted a full picture of who actually frequented the shop, said Alan McKeon, the CEO of Alexander Babbage, which packages location information for owners. Now, mall owners can see exactly who walks into a shopping center, the zip code they live in and the stores they frequent.

“The actual shopper has become much more important to us,” McKeon said. “Understanding who they are and how they behave.”

Morris added that census data can get outdated very quickly and might not reflect the current make-up of a neighborhood or who travels through one daily.

“It’s a way to actually anticipate a direction of how a market is heading,” he said. “Unlike census data, which [is only] updated every 10 years.”

The data can help in myriad ways including figuring out the tenant make-up of a property, if an owner should renew a store’s lease or if a retailer should open up a new outpost.

SHOWFIELDS—WHICH BRINGS MULTIPLE BRANDS UNDER ONE ROOF AT 11 BOND STREET—HAS A SENSOR IN EVERY 90 SQUARE FEET OF THE 14,000-SQUARE-FOOT STORE WHICH ALSO INCLUDES TABLETS AND SELF-CHECKOUT KIOSKS. MALL OWNERS AND RETAILERS HAVE INCREASINGLY STARTED EMBRACING TECHNOLOGY, ESPECIALLY LOCATION ANALYSIS, TO GET A SENSE OF WHERE AND HOW THEIR CUSTOMERS LIKE TO SHOP. PHOTO: EITAN GAMLIELI

As an example, McKeon pointed to an analysis Alexander Babbage did for people who visited the High Line around the time that Hudson Yards opened in March. It found that, on average, they had an income 25 percent higher than other New Yorkers and spent about 94 minutes in the park.

“If I had a coffee shop or a restaurant appealing to that demographic, I probably can peel some of those people off the High Line,” he said. “You can design the leasing strategy for a development.”

Dobrowski guessed that it could also help brokers and potential buyers figure out whether or not a certain mall property would be a good investment.

“I could see it being a nice supplement to just understanding the overall health of the asset,” Dobrowski said. “Sales, census data and research were more macro. It doesn’t really provide that real-time snapshot that you’re looking for when you’re making a decision.”

And with malls rushing to add more “experiential” options like movie theaters, amusement parks and coworking to fight back against e-commerce, data can be key to figuring out what kind of uses to add and if they’re successful, Cohen said. A June 2018 analysis by Foursquare found adding these amenities increased foot traffic by 15 percent in malls around the country.

“This data illustrates how important it is for retailers to leverage technology to understand specific foot traffic patterns, and then to make appropriate real-estate and retail decisions armed with this knowledge, driving real business results,” Cohen said. “For example, salad places at high-end malls tend to drive an increase in foot traffic.”

Foursquare originally launched in 2009 as a consumer app that let users check in to spots like bars and restaurants on their phones to keep track of where they go, and offered them digital achievements. In recent years, the company switched tactics to share its collected location data to companies.

The field, known as location analysis, had a market value of $8.35 billion in 2017 and it’s expected to grow to around $20 billion by 2023, according to a report from Market Research World. In 2016, Foursquare raised a $45 million Series D round from investors while Placer.ai raised $4 million in 2018 to launch. Big brother can be big business, it seems.

However, it’s still very unclear how many shopping malls and retailers use this data—with most analysts declining to name specific customers. But some major owners have been involved.

Simon Property Group, one of the biggest mall owners in the country, led a $33 million Series F investment into Foursquare by its venture fund, Simon Investors, in October 2018, according to Foursquare. Kimco Realty also started piloting different technologies and location analysis in its mall properties, according to a 2016 International Council of Shopping Centers report, but a spokeswoman for the company declined to publicly share its efforts in this space.

“It unlocks a whole new dimension for understanding your customer,” Morris said. “Companies are looking for innovation and they’re open to new ideas.”

There are many different ways to find out who your shopper is. Previously, companies relied on location data provided by cell towers bought from cell phone providers, McKeon said. While cell towers are prevalent across the country, they’re not as accurate in pinpointing where a person is, The New York Times reported.

Foursquare relies on location data voluntarily provided by users of its apps like Swarm as well as from other developers like Twitter and Uber, who use its location tools. Others can track a user when they sign on to a Wifi network in a mall, McKeon said.

The most common way is to buy data collected through third-party products like weather and news app that constantly pin where the user is located.

Alexander Babbage and Placer.ai clean up the information, combine it with census data and sell it to retailers and landlords in reports. Both claim it’s all anonymized and McKeon added Alexander Babbage won’t release data sets of less than 100 people. They said the information not being tied to a specific person is enough to protect their privacy.

But not everybody is as comforted by that notion. A Times report found that disclosures on location analysis in third-party apps can be vague, misleading or incomplete. Senator Ron Wyden, D-Ore., has proposed bills to limit the collection.

“Location information can reveal some of the most intimate details of a person’s life—whether you’ve visited a psychiatrist, whether you went to an A.A. meeting, who you might date,” Wyden told the Times in December 2018. “It’s not right to have consumers kept in the dark about how their data is sold and shared and then leave them unable to do anything about it.”

Last year, the European Union passed a law—the General Data Protection Regulation (GDPR)—which requires companies to plainly state what kind of data it’s collecting about a user and require them to agree to it, but the field is largely unregulated in the U.S. as of yet.

McKeon praised the GDPR and said it will make for better data collection in the future because people would be more willing to share information if they’re clear on what it’s used for.

“When you explain to a consumer, ‘Hey, this is what location data does. It helps us do X, Y, Z on an app and here’s why we share it,’ consumers seem to react positively to that,” he said. “There’s a trade-off. I get this free app and part of that is I’m trading away certain pieces of information.”

Foursquare has also called for better regulation in the U.S. and has previously told tech website The Verge that it turned down multi-million-dollar offers to sell the data to certain big companies.

“A core belief at our company is that data is a privilege, and we act accordingly,” Cohen told CO. “We believe that location should only be shared in the case of a true value exchange related to location, and we believe in true informed consent (location permissions should not be buried deep within terms and conditions.)”

Morris said Spatial.ai simply decided to stay out of the debate because it only collects public posts made on Twitter and Facebook tagged to specific locations and doesn’t store anything but the content.

“There are billions of data points on social media that are all publicly available and have a location,” he said. “We’re not doing anything or storing any user data. [With location data] it can be difficult to see what’s okay to share and what’s not, so we stay pretty far away.”

While location analysis might be all the rage, it’s not the only technology retailers are utilizing to target customers.

Some have started to install Bluetooth beacons—more accurate than GPS data—which track a customer inside a shop and can send them advertisements based on that information, the Times reported.

Noho retailer Showfields—which features multiple brands under one roof—said it has sensors in about every 90 square feet of its 14,000-square-foot 11 Bond Street store. These include catalog screens and self-checkout kiosks that can be customized by the brands leasing space inside to help them “understand how a space performs,” said Tal Zvi Nathanel, the CEO and founder of Showfields.

“We use our tools to optimize all parts of the experience, from the point of sale to how we design our space,” he said. “We already completely changed the layout of the third floor based on data we collected in the first two months on the first floor.”

This article was originally written & published BY NICHOLAS RIZZI JUNE 24, 2019 4:00 PM on commercialobserver.com