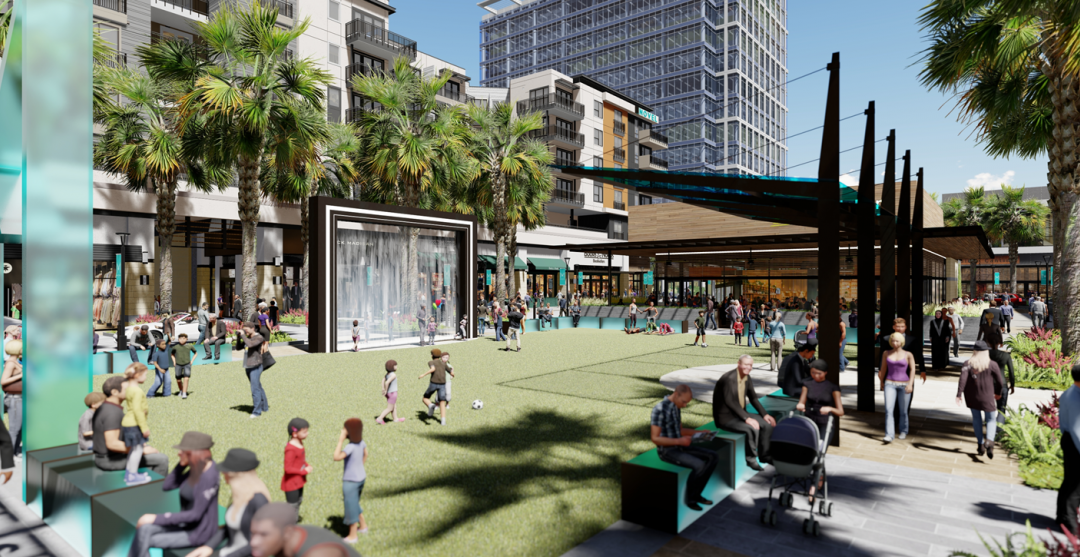 The $500 million Midtown Tampa is finally going vertical, 22 years after the Bromley Cos. first imagined a development on North Dale Mabry Highway near Raymond James Stadium in Tampa, Florida.

It is one of a handful of signature developments expected to raise the profile of Florida’s third-largest city, which already has experienced robust job growth in recent years. Other projects include Heights Union, where coworking giant WeWork will lease 50,000 square feet next year, and the $3 billion Water Street Tampa, backed by Microsoft Corp. co-founder Bill Gates and Tampa Bay Lightning professional hockey team owner Jeff Vinik.

Bromley executives and newly elected Mayor Jane Castor gathered at the 22-acre Midtown Tampa site Wednesday to commemorate the start of construction. The bulk of the project is due to be ready in time for Tampa to host the Super Bowl in February 2021.

“It’s a huge milestone for any project to have buildings come out of the ground,” Bromley Chief Executive Nicholas Haines said in an interview. “But this site we see as a generational development opportunity.”

New York-based Bromley has spent the past year preparing the property for construction. The 1.8 million-square-foot project will include three office buildings, 390 apartments, 200,000 square feet of shops and restaurants and a 226-room, dual-branded Marriott hotel. Grocery chain Whole Foods Market will anchor the project.

The rooftop of the seven-story Element and Aloft hotel will offer waterfront views of Tampa Bay and skyline views of downtown Tampa and downtown St. Petersburg, Haines said.

Midtown Tampa dates to 1997, when Bromley started acquiring the first of roughly three-dozen parcels in the area, just off Interstate 275. The firm took its time considering its options and ultimately planned a large office development to serve the growing Westshore business district.

But Bromley had to postpone the project during the financial crisis and Great Recession of 2008. When the market recovered, the company started buying more land and decided to build a bigger, mixed-use development.

The Westshore office market is the largest and one of the most coveted in Tampa Bay. Consistently strong demand pushed vacancy rates into the single digits for the first time in a decade before upward pressure in recent quarters increased the vacancy rate to 10%, according to CoStar Market Analytics.

Meanwhile, West Tampa’s multifamily market has a vacancy rate of 6.9% and is one of the most active areas in Tampa Bay with strong leasing activity, the latest CoStar report shows.

“Major employers are increasingly attracted to the area,” the report noted. “Additionally, West Tampa has an abundance of specialty retail stores, department stores and restaurants that create an upscale atmosphere, drawing in renters looking for a live/work/play environment.”